Why use an orthodontic TAD with a collar? 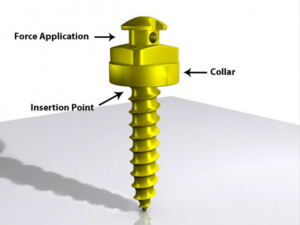 The Securus orthoTAD is the only orthodontic skeletal anchor designed with a patented concave collar, and is site specific, meaning designed for a specific morphological location. This is similar to an orthopedic bone screw design. This was evaluated recently as a masters’ thesis and the findings showed a significant reduction in failure using these design principles.

A thesis submitted to the Department of Orthodontics, Oregon Health and Science University School of Dentistry in partial fulfillment of the requirements for the M. S. degree

Studies have documented the use of titanium mini-implants in providing skeletal anchorage for orthodontic tooth movement. Clinical success rates are variable and typically reported between 70% and 100% . The purpose of this in-vitro study was to test the hypothesis that mini-implants with collars give the orthodontist superior force resistance, superior stability (anchorage) and cause less surface bone strain compared with mini-implants without collars.